Fluo diving is a particular way of night diving, where instead of diving with normal lights, an ultraviolet or blue light source is used. With this setup, we can see and photograph not the normal reflected light from the marine creatures, but the fluorescence phenomenon. Most sea animals and plants contain proteins that have the property of emitting light at a lower wavelength after absorbing a high-wavelength light. This allows us to illuminate with a blue or UV light and observe green and red colors that would not be seen under normal conditions.

Blue light is more efficient in stimulating fluorescence in sea creatures; however, if directly observed, the light from the torch would be much stronger than the effect that we want to observe. Because of this, when diving with a blue torch, we need to use yellow filters (yellow being the complementary color of blue in the RGB color space) that block blue light and let green and red light pass.

Good additional information on fluorescence can be seen at http://fluomedia.org/science/

Fluo diving is still not a widespread practice, and the available equipment for it is supplied by few manufacturers. Instructions are available to modify existing torches to provide blue or UV light; however the equipment used for the modifications is generally expensive (>$200 for the torch). However, it is possible to find cheap underwater torches that have reasonable performance at minimal cost ($15). This work aims to modify such a torch in order to obtain fluo diving equipment for shallow night dives (up to 15-20m, a typical depth for tropical night dives). The equipment is yet untested on the field, but a thorough testing on the bench has been performed.

It is of great importance that filters and the lights are correctly matched, to avoid blue light spillage and/or suppression of fluorescence colors.

The material can be easily found on ebay, with the exception of the dichroic filter that I used in one torch. I bought 3 torches and prepared 2 with blue LEDs, one of which also contains a filter.

Comparison: A «Bluebright» torch from fluomedia, filters from the same site.

You will probably want:

For testing, I used the DIY desktop spectrometry kit from Public Lab: https://publiclab.org/wiki/spectrometer

The torch can be disassembled into three parts.

You can also see the 4 orings that I suggest replacing, as they usually come in terrible condition.

The glass (actually made of acrylic in my model) can be removed by unscrewing the top of the head. You can see the green oring that provides sealing. 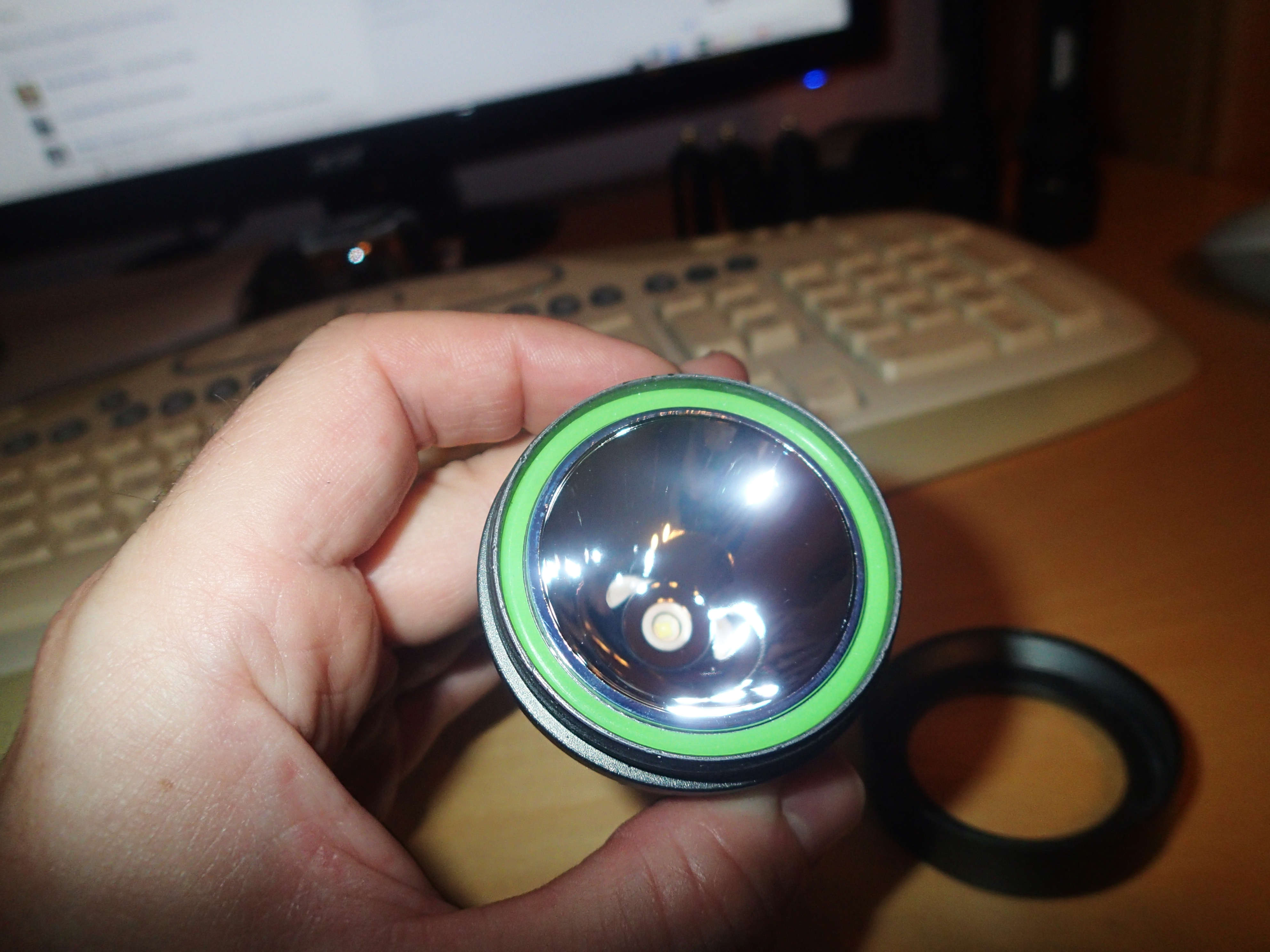 By removing the reflector, the LED can be accessed and gently pulled out. 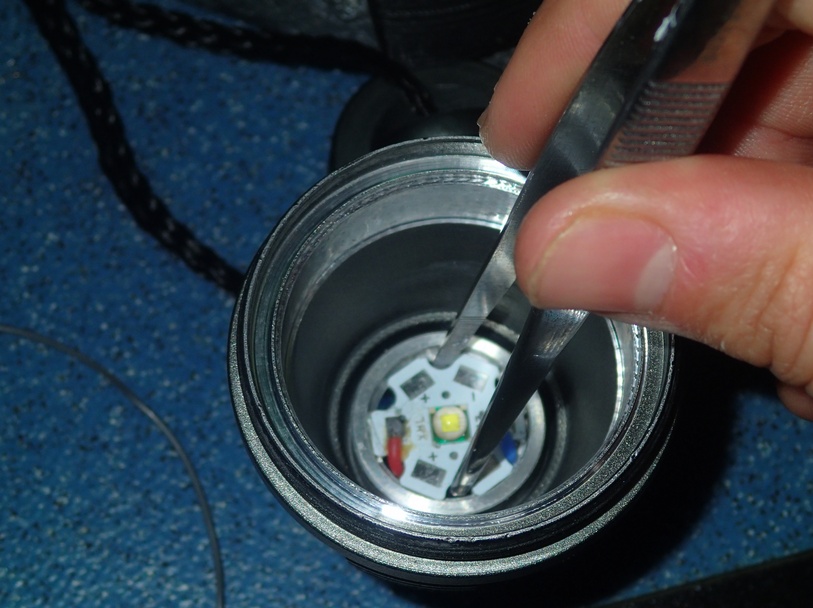 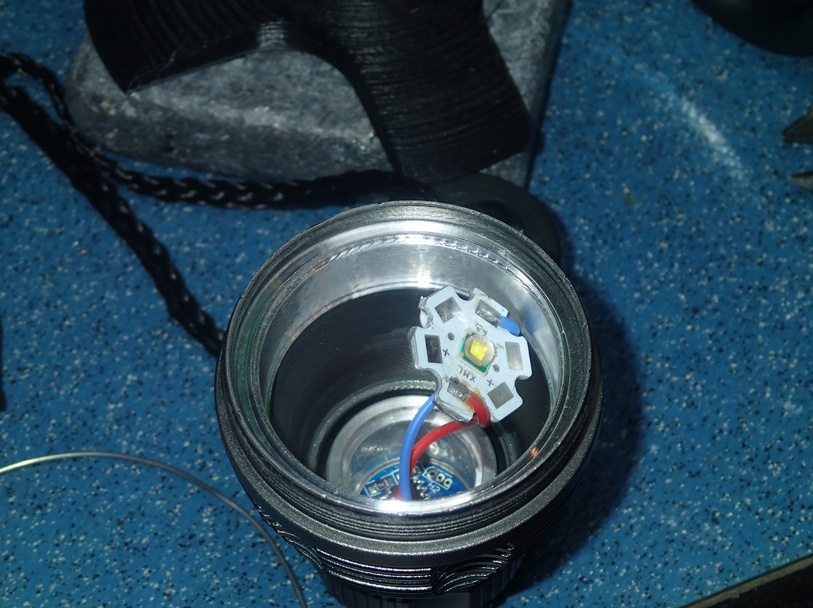 Use a soldering iron to detach the LED star PCB from the cables. You need some patience because the whole PCB is a big heatsink and it takes some time for the solder to melt. Here you can see the original white LED (left) and the blue LED (right). Solder the replacement LED to the cables, and reassemble the torch.

On one of the torches, I added a dichroic filter from Fluomedia. I simply placed the filter in the reflector, and added a bit of glue. I used cyanoacrilate gel (superglue). It's fine, but its vapors corrode the acrylic glass. So do not reassemble the torch for at least a couple of days after applying the glue, to avoid the glass becoming opaque. 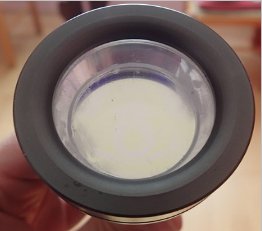 I used a spectrometer to check the spectra of the torches and of the filters that I made.

These are the spectra of the three torches:

The Fluomedia torch has the narrowest spectrum, the homemade torch with no filter has the widest. However, no torch has significant emission above 500nm (green is around 510nm). So the performance will depend on the filters. I remind you, we want the filter to eliminate the contribution of the direct light.

These are the filters, where “ebay small” is the yellow acrylic and “ebay large” is the “bright yellow” acrylic. What is shown is the transmission spectrum (what goes through after shining a white light through them). A value of 1 means perfect transmission:

You can see that the fluomedia filter has a significant leakage towards lower wavelengths, with the “ebay small” is the most selective. Here's how the filters look like by the way. The one shaped like a mask is the fluomedia one: 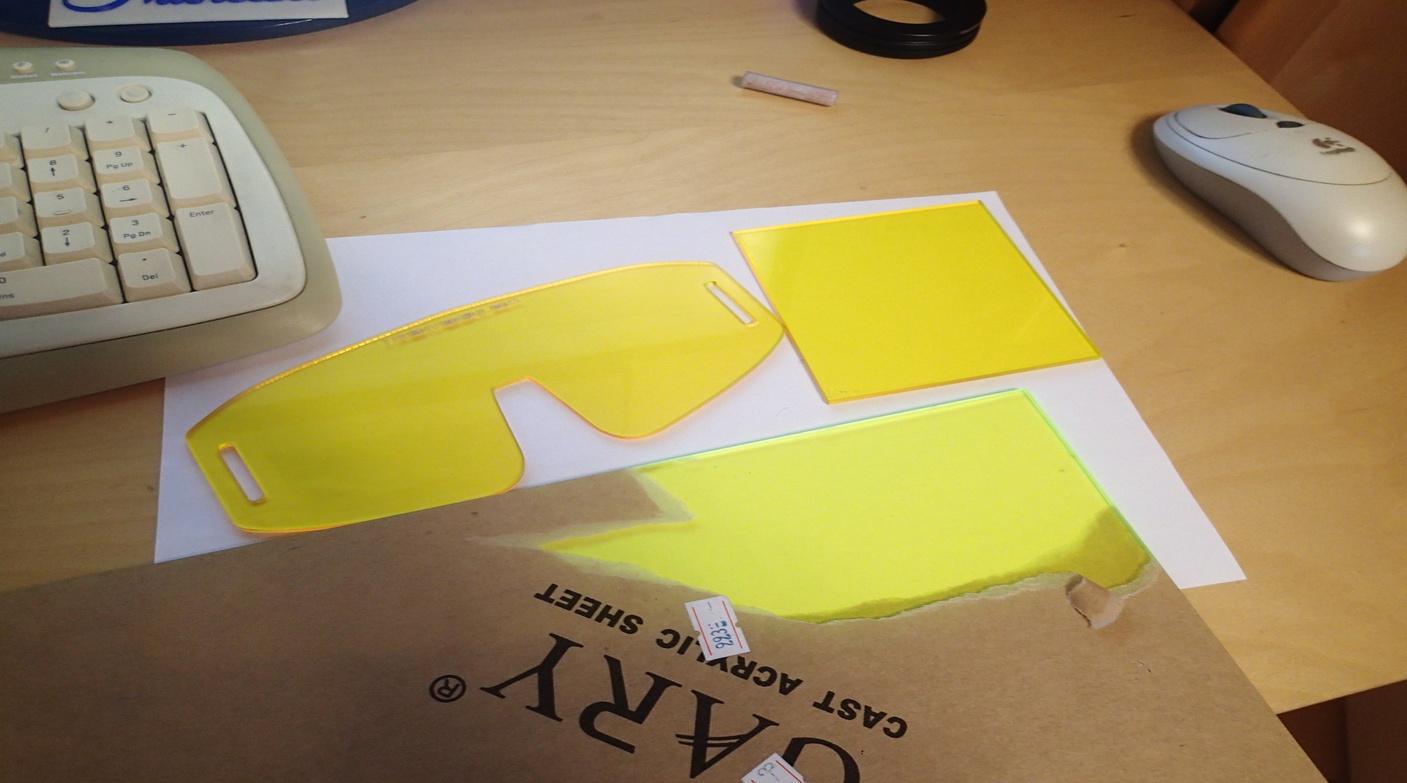 Here's a plot showing how the blue light of each torch is filtered by each filter: 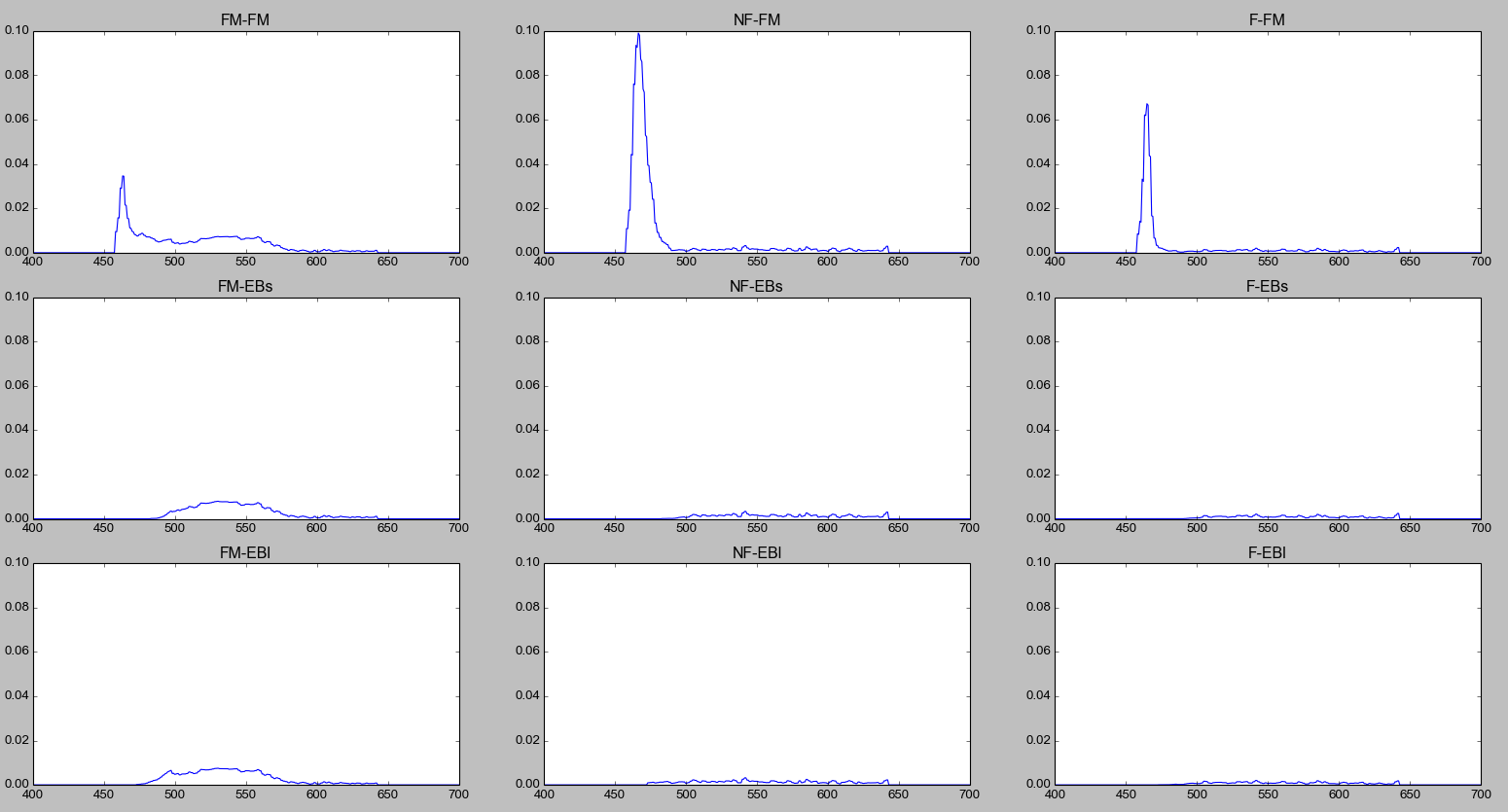 A value of 1 would mean that 100% of the peak luminosity of the torch is let through at that particular wavelength.

The first row is the Fluomedia filter, and it is clear that it is the filter that lets the most blue light go through. I wouldn't use this filter with the unfiltered homemade torch. However, both the yellow and light yellow filters have good performance on all three torches. However, I don't know how consistent the color is across different batches of acrylic sheets.

Finally, here some beamshots of the different torches:

However, I tested the fluorescence on a plant (chlorophyill has red fluorescence) and the unfiltered torch did not show a nice color. The filtered one, however, did: 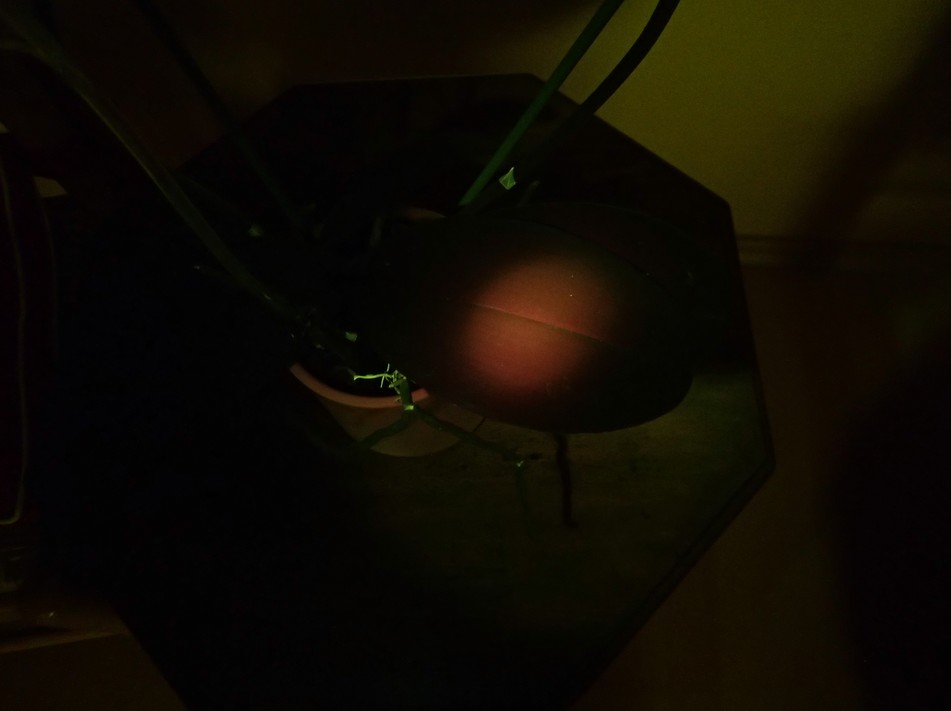 Finally, a picture of the torch submerged in water: 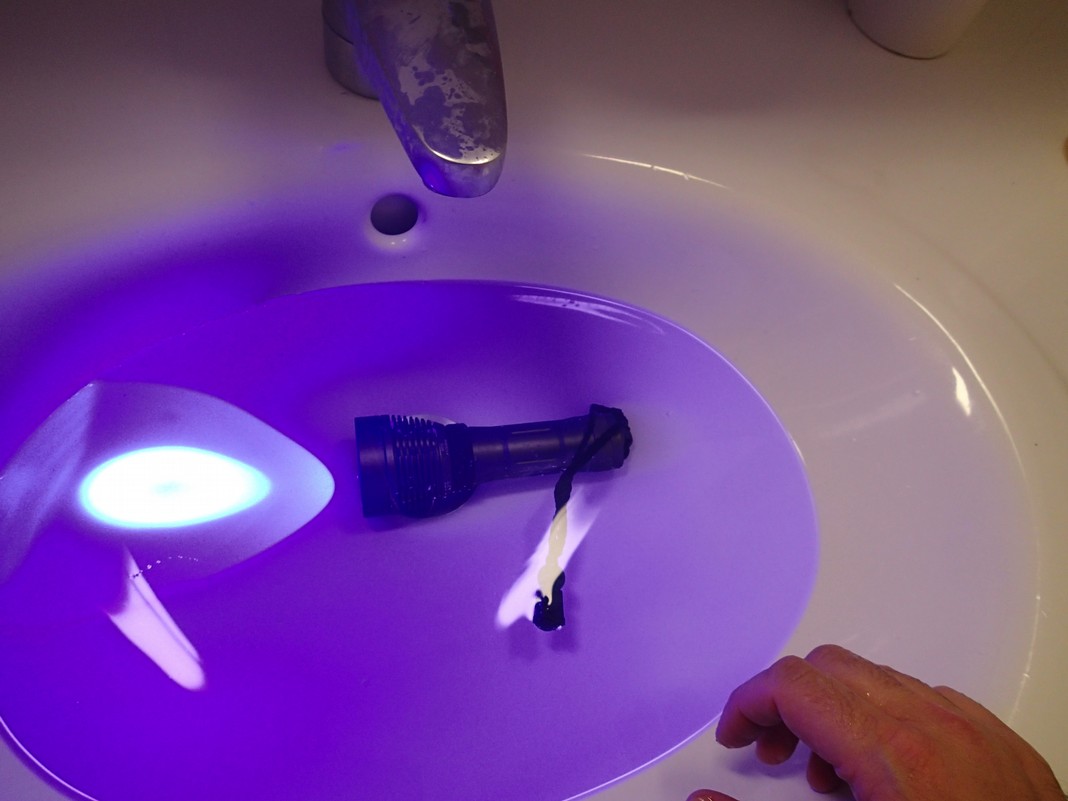 It seems possible to obtain a good and bright fluo diving torch with a very small investment. The most expensive component will be the dichroic filter, which, despite not seeming necessary on the bench, it seems to make a big difference in highlighting the fluorescence. The total cost for a torch is around $50, half of which is the cost of the filter.

Acrylic sheets from ebay seem perfectly suited as barrier filters, however, a way of cutting them to size and of attaching them to the mask needs to be found.